Should we be losing sleep over the corporation tax NOT paid by big business?

One of the challenges of becoming an economist concerns developing a broad focus. This is particularly important as politicians and the media love to slip the blinkers on when it comes to debating economic issues. This has been highlighted recently by the lively debate caused by the revelations of the corporation tax certain organisations haven’t been paying!

While on the face of it not paying much corporation tax might seem like bad behaviour, corporation tax is just one of the many taxes that exist to alter economic incentives, redistribute income and fund the cost of merit and public goods. VAT on sales and income tax on salaries, bonuses and dividends to name a few. As economists (provided we do not allow our own politics to cloud our judgment) we should be more interested in the overall tax paid rather than on the amount of individual tax components.

We should also keep thinking about the circular flow of income and how tax changes alter the balance between injections and leakages. After all we should be focussed on increasing investment so that the productive capacity of the economy continues to rise leading to sustainable real growth in the economy. Even if companies don't pay any corporation tax at all (the Government could decide to abolish it!) and use the money instead to invest or create jobs, would that be such a bad thing?

Taking a holistic economic view of the position, the issue is not about whether the taxes should be higher, it should be about whether economic activity can be improved by adjusting the taxes. This will only happen if the government can spend the tax revenue more wisely than the corporations would if they retained the value of the taxes within the business. Who would you back?

This week’s edition of EzyEconomics News, Jack Matthews takes a thought provoking look at this debate to try and present a more balanced and multi faceted analysis of this hot subject.

Tweet
5 steps to evaluation heaven!
Is People’s QE as insane as it sounds? Year 12 Recap - Supply Curves
EzyEconomics Blog
Today's Year 12 Recap is looking at the topic of supply curves. Supply curves provide economists with a graphical way of representing the quantity supplied of a good or service at any given price. Bei...
6438 hits
0 comments
Read More
03 May 2019 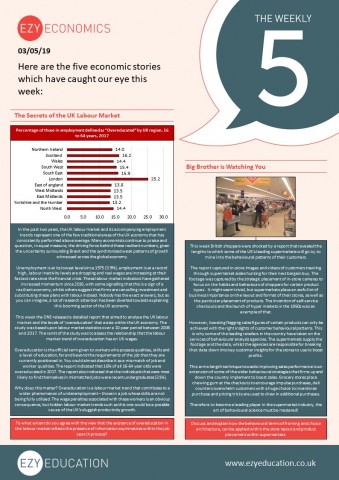 EzyEconomics Weekly 5 - 3rd May
EzyEconomics Blog
The Weekly 5 returns after the Easter Break and what an edition we have in store for you this week! I...
806 hits
0 comments
Read More
07 May 2018 Business Studies Year 13 revision Day 11 - Causes of change
EzyBusiness Blog
On Day 11 of the Year 13 recap, we review the factors that can cause strategic change within a business.Change can be disruptive, in the sense, that it can destabilise the processes and operatio...
2516 hits
0 comments
Read More
08 March 2018 Countdown to Exams - Day 11 - Laws of Indices
EzyMaths Blog
Today we are looking at the topic of Laws of Indices. It is important to understand that an index might be referred to as a power (the little number in the upper right corner) and that the base is you...
5707 hits
0 comments
Read More